This is a member's only video, please login to watch

Whither Radiology: Looking the Future in the Eye 31 Jan 2020


Radiology is at the centre of contemporary medical practice. Radiological imaging is better than ever, there is fusion of structure and function, and molecular imaging is developing very fast. However, radiology faces significant challenges because of the cost of imaging, information overload and the advent of artificial intelligence (AI). Efforts to contain costs by decreasing demand have not proved successful. Similarly, technological developments such as teleradiology and AI are mainly aimed at increasing quality rather than decreasing expense.

AI has developed significantly in recent years and is proving very successful at performing certain tasks where pattern recognition is the main requirement. However, it will not replace radiologists in image interpretation. It will prove to be a useful tool and an ally rather than a competitor.

As AI assumes many routine tasks, radiologists must focus on those aspects of their role that cannot be undertaken by a computer. The best way to enable imaging to reach its potential in modern medicine is for radiologists to become more clinically oriented and to increase their communication with patients and referring physicians.

Educational aim:
• To understand the direction of radiology has to take in the light of current technological developments 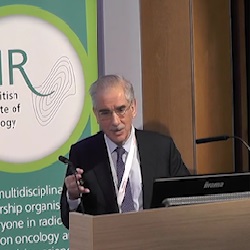 Professor Andreas Adam is a Professor of Interventional Radiology at the University of London. He trained in medicine at the Middlesex Hospital Medical School, and specialised in radiology at the Royal Postgraduate Medical School, and is a Fellow of the Royal College of Radiologists, the Royal College of Physicians and the Royal College of Surgeons. In 1992, he was appointed to the first professorial chair of interventional radiology in Europe, at King’s College London. In 2012 – 2015 he served as Dean of the first state medical school in Cyprus. His research work has shaped clinical practice internationally and has been recognised by the award of Fellowship of the Academy of Medical Sciences. He has made extensive original contributions to the medical and scientific literature, has published eleven books, and has served as Editor-in-Chief of cardiovascular and interventional radiology. Professor Adam was one of the architects of the European Society of Radiology, which he helped to create by merging the European Congress of Radiology with the European Association of Radiology. He has held the presidencies of eight national and international societies, including the Royal College of Radiologists, the Cardiovascular and Interventional Radiological Society of Europe, and the European Society of Radiology. He has received numerous honours and awards, including fifteen eponymous lectures, honorary fellowship of seventeen national radiological societies, five gold medals and two honorary doctorates. In 2012, he was made a Commander of the Most Excellent Order of the British Empire in recognition of his contributions to interventional radiology.