This is a member's only video, please login to watch


This presentation will focus on current questions being addressed using advanced computer analysis of medical imaging, and in more general medical data. It will describe the potential advantages that computer tools bring to the prediction of disease severity and estimations of disease progression. It will use fibrosing lung disease as an exemplar disease type though the principles apply to the study of most disease processes.

Visual analysis of CT imaging has been suggested as an imaging biomarker of disease progression. However, it is limited by variable interobserver agreement for disease patterns on CT. In describing lung fibrosis, radiologists have maintained the descriptive terms on lung CT imaging that were developed 20 years ago, despite CT scans improving in quality and resolution. It is probable that patterns of disease, quantifiable on three-dimensional volumetric imaging would not be considered when working-up a patient with lung fibrosis. This talk will also discuss how computer analysis might identify earlier stages of lung fibrosis in the future, thereby allowing earlier intervention with disease modifying agents.

Furthermore, it will also describe how computer-based analyses such as those described for lung fibrosis might change current medical pathways. It will describe how detecting disease exacerbations might move out of the hospital setting and into the community. Clinical teams may require input from additional team members such as data scientists and computer programmers. Importantly, clinicians and the NHS will need insight into how rigorous the testing and validation of proprietary computer tools has been prior to their purchase and use. 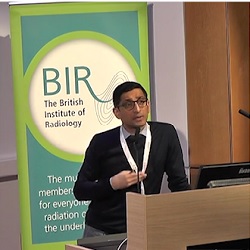 Joseph Jacob qualified in medicine from Imperial College London. He then worked for Médecins Sans Frontières for 2 years, before undertaking radiology training at Kings College Hospital, London and Auckland City Hospital, New Zealand. In 2016, Dr Jacob completed a MD(Res) at Imperial College London under Professor David Hansell at the Royal Brompton Hospital. In 2018 he was awarded a 5-year Wellcome Trust Clinical Research Career Development Fellowship. His current research, based at the Centre for Medical Image Computing and the Respiratory department at University College London, relates to the use of computer-analysis of CT imaging in various lung diseases, with a primary focus on fibrosing lung diseases. Dr Jacob has co-authored over 50 papers, won national and international awards for his work, and was awarded the National Heart and Lung Institute prize for the best thesis of 2017.